Mods are what give your weapons real damage. They also allow you to customize your weapons to fit your play style. There is no single correct way to mod any weapon, but this guide will hopefully explain where you should start with your mods. Once you know and understand the rules, you can break them.

If you have more questions, always check the Warframe Wiki: https://warframe.fandom.com/wiki/WARFRAME_Wiki

General overview of the Weapon Stats 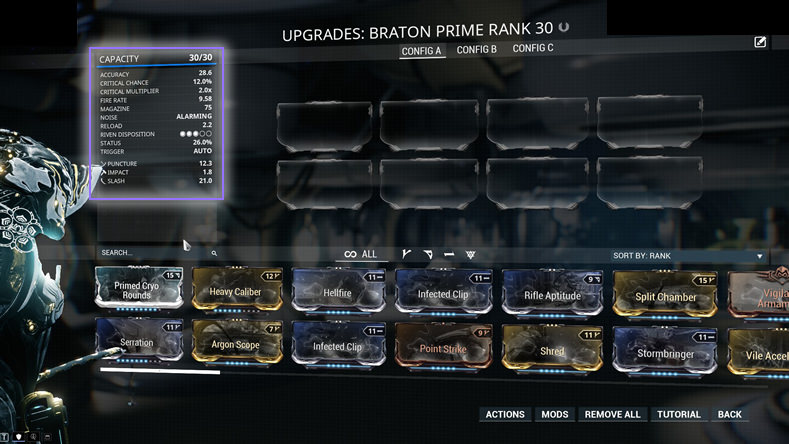 Status Chance
Status Chance determines the chance your weapon has to proc a status. For more info on status, see the wiki. For example if you were using a weapon with corrosive damage and you proc’d a status with a shot, your enemy would have their armor reduced up to 75% and would take more damage to whatever was beneath their armor, presumably flesh, killing them noticeably faster.

Punch Through
It’s exactly what it sounds like: the distance a projectile will travel after it hits a target, before it will stop. This is an uncommon stat and is usually sidelined in favor of other mods/damage types, but it’s very useful on sniper rifles or rifles with high single-shot damage. Most weapons do not come with this stat; it must be added with a mod.

IPS
IPS is how Impact, Puncture and Slash damage is abbreviated. These Physical Damage Types are usually the base damage types on weapons, but they are not the damage types that will give you the most damage. IPS mods are practically useless unless 90% of the weapons base damage comes from one of those stats. Math is explained later.

Base Damage
This is not listed on your Weapon Stats, but it's your IPS all added up and it’s considered the base damage that your weapon can put out. It’s calculated as

These are listed in order of importance. 95% of the time, you will mod weapons this way, but once you know enough about modding you can change a weapons damage to fit how you like to play.

Flat Damage
Mods that increase your base damage by a %. This is easily seen on IPS stats and is calculated as

Multiple flat damage mods are additive, so they would be calculated as

or if you also have other flat damage mods on, 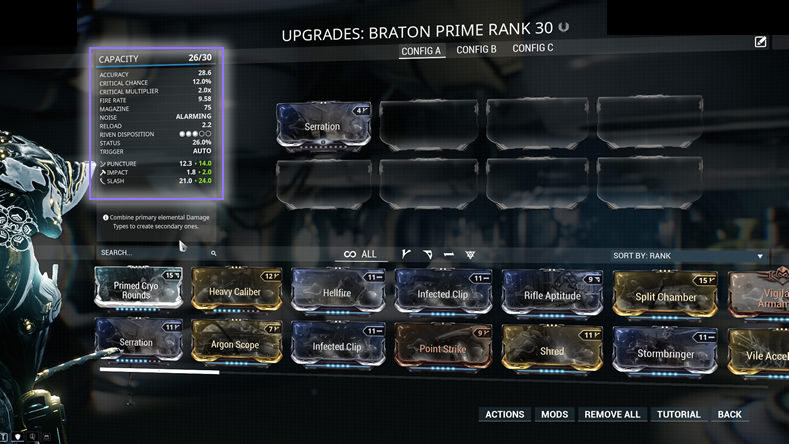 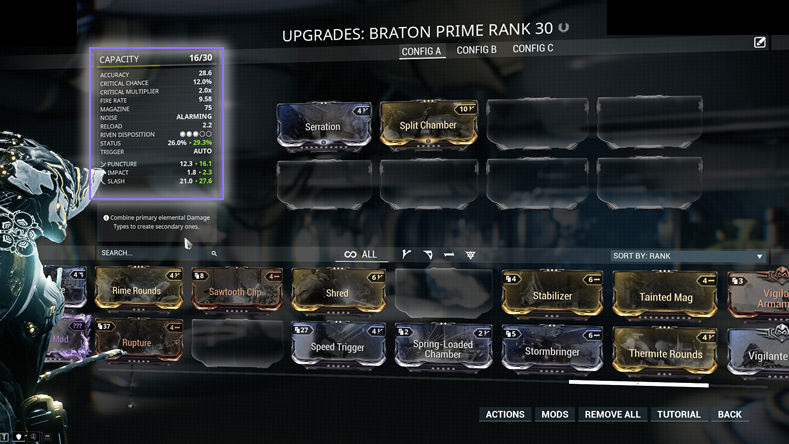 The Point: Flat damage mods are the best way to increase the stats your weapon comes with, and are a huge boost to all the other damage mods you’ll use. Always use one or more, preferably a flat damage mod and a multishot mod at least.


Elemental Damage
Mods that add elements to your damage types, such as heat, cold, toxin and electricity. Elemental damage is calculated based on your IPS damages added together after Flat Damage mods

This damage is added on top of your IPS damage, which means that a 100% Cold Elemental mod would effectively double your weapons DPS, half of that damage turning to Cold.

Elemental mods can be combined in pairs to form new types of Elemental damage. For example, using a 90% Toxin mod and a 90% Electricity mod on the same weapon would give you 180% Corrosive damage. This would almost triple the DPS of your weapon with nearly 2/3 of damage turning to Corrosive.

The order in which you place these mods determines how the game recognizes what combinations are being used. Putting a Toxin mod next to an Electricity mod will give you Corrosive, but putting a Heat mod between them would give you Toxin+Heat=Gas and Electricity. Don’t accidentally give yourself gas (joke).

Different enemies take more or less damage from these elemental types. Check out the wiki for tables and tables worth of data to see what kills who the quickest. 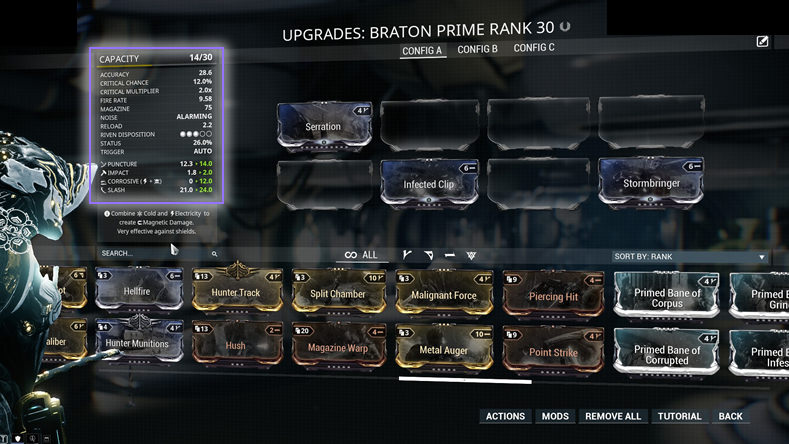 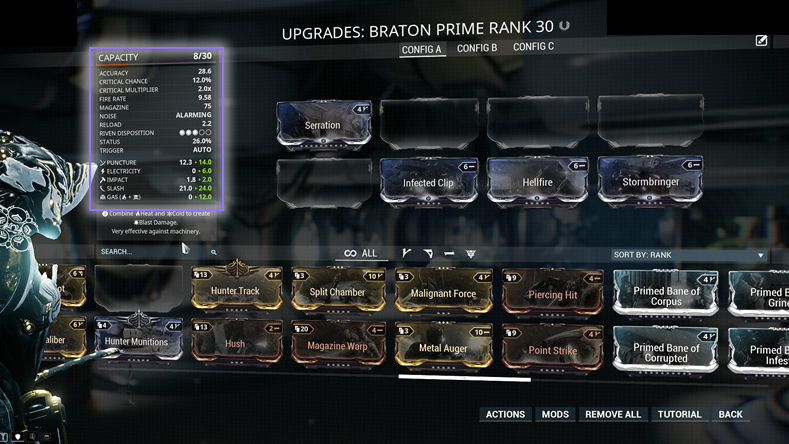 
IPS
This is the last damage type to consider, if you consider it at all. IPS mods all focus on one type of Base Damage, either Impact or Puncture or Slash. It’s not worth it to add an IPS mod unless one of these stats on your weapon deals at least 90% of the weapons total Base Damage, or if your weapon has only one of these damage types. The reason is that an IPS mod may say it gives you 30% more damage on a stat, but that’s just one stat, and the overall damage percentage can actually be much lower:

You’ve increased your weapons Base Damage by 16% which ≠ 30%, and you’re using a mod slot that could be used for a Flat Damage increase. Say you used a max rank Serration mod instead, which gives 165% Flat Damage:

You’ve increased your weapons Base Damage by 27%, nearly the full face value of that 30% Puncture mod. Here it is with a 165% Serration mod instead of a 30% Puncture mod:


The Point: IPS mods are almost never worth it, but some weapons lack Puncture damage, others lack Impact or Slash damage. If you have a weapon that only has one type of Base Damage, your IPS mods will be worth their face value (30% increase of one damage type is a flat increase of 30%). Otherwise, that 30% is more like 20% or 10%. In any case, one mod that does 165% damage increase to all IPS stats will always be a better investment than just one 30% damage mod for a specific damage type.


Fun
At this point it’s all about the weapon you’re using. Maybe it has a slow rate of fire; slap on a mod to increase it. Maybe it takes forever to reload; use a mod to decrease that time. Maybe you have a special mod that is weapon specific. If your weapon has low Critical Hit Chance but higher Status Chance, see how high you can get that Status Chance, or if the opposite is true then stack Critical Hit Chance and Damage. Go nuts.

Capacity
Mod Capacity is like a pool of points on a weapon that mods will draw from; when your capacity hits 0, you can’t add anything else to it.

When you level up mods, they will take up more capacity. It is very easy to fill the capacity of a non-catalyzed weapon to 30 using just one or two mods. To make more space, you can polarize mod slots using forma, which will half the cost of a mods capacity when both slot and mod share the same polarity.

Important: You can only polarize the slot of a max level weapon. When you polarize a slot, the weapon level is reset to 0 and you will have to level it up again. You do not gain experience from leveling this weapon again. 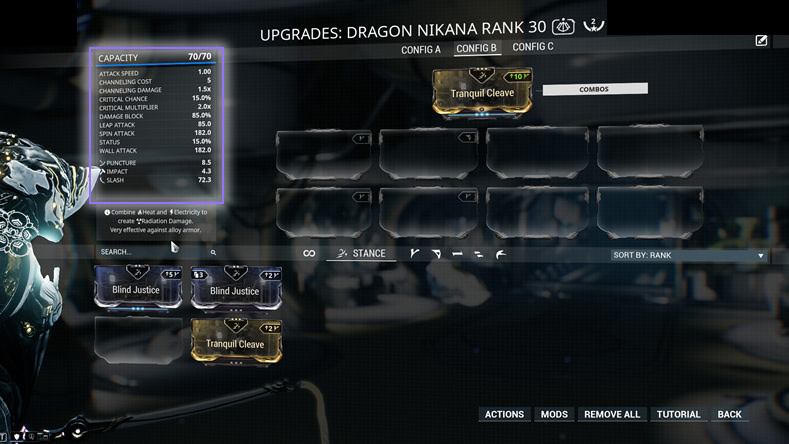 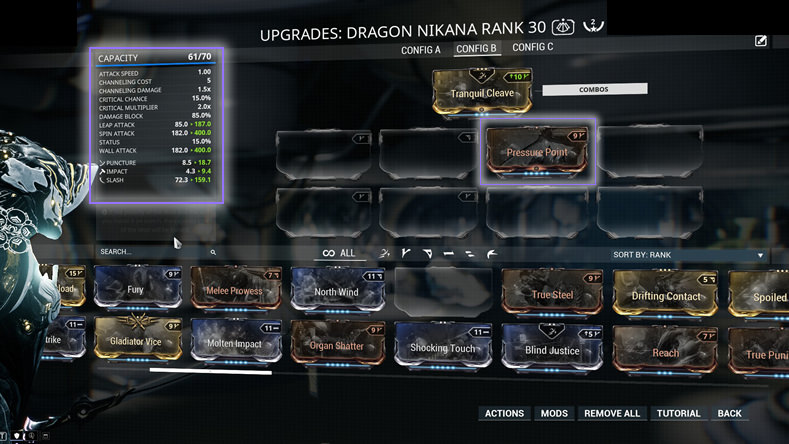 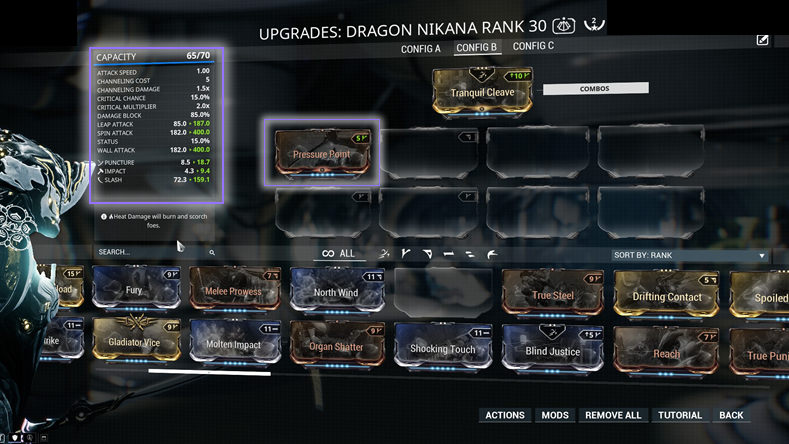 After using forma to polarize a few slots, you can fill your weapons mod slots with some powerful mods bringing your weapon damage, way way up 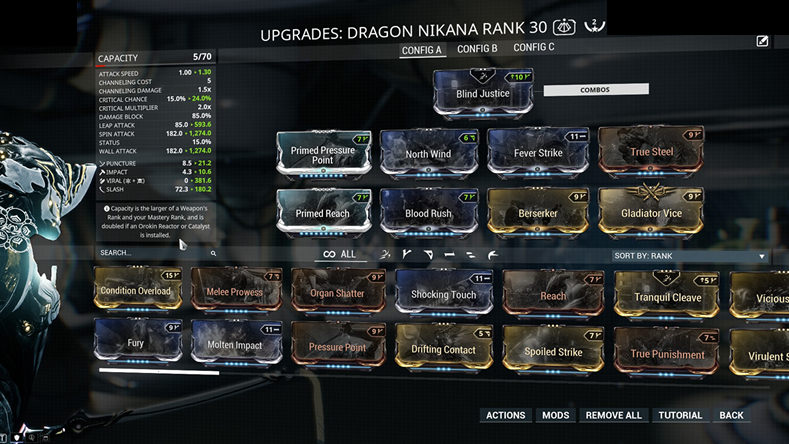 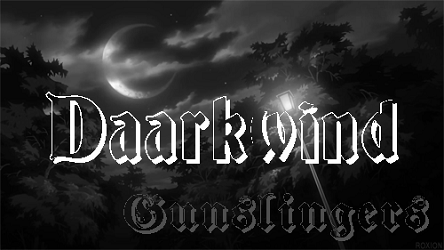 no problem, glad it helped